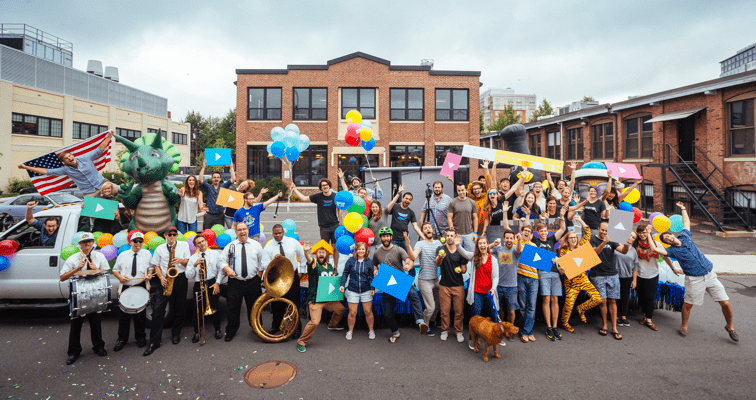 The Background Story on Wistia: Building a Brand & Culture That You Want

How do you go from an idea in a living room to growing your company to over 80 employees and 350,000 customers with a highly respected brand and culture along the way?

Ask Chris Savage, the CEO & Co-Founder of Wistia, a video platform that enables business teams (marketing, sales, HR/recruiting, customer support, and training) to harness the connective power of video in Cambridge, Massachusetts, and he might have your answer.

Savage grew up in Providence, Rhode Island in a family of techies. His father, John Savage, helped start the computer science program at Brown University. His brother worked at Microsoft for several years and his sister’s ex-husband was very early at Microsoft. “He was Bill Gates’ right hand man. It was an interesting thing to witness when I was 13 years old,” said Savage. “Our family would beta test Microsoft Flight Simulator and we were always early adopters of consumer tech, like owning a DVD player before it became the norm in every living room."

Savage attended Brown and instead of studying computer science, he followed his passion in film by graduating with a degree in Art-Semiotics, which is centered around the theory of film making. This was the same period of time when YouTube was starting to gain momentum and he realized how much this was going to change online video. However, he also noticed that despite this opportunity, professional filmmakers were not using the platform because the quality was not high enough.

This led Savage and his co-founder, Brendan Schwartz down the path of brainstorming new ideas to help filmmakers with online video,giving life to Wistia in 2006. The first idea for the company was a filmmaking competition for creating ads. “We wanted to get a sponsor, like Coca-Cola, where it would be a great PR moment for them,” said Savage. “But, it ended up being too complicated and the idea didn’t work out.”

After three months, Savage and Schwartz pivoted and built a website where filmmakers could showcase their work with an online portfolio. The site started to gain traction with 500 - 600 users, but the company started to run out of money. They thought about charging filmmakers a nominal monthly fee for the service, but the customers scoffed at the idea.

At this point, it was 2007 and online video was exploding. Savage and Schwartz noticed a niche that no one was focused on. This niche was centered around helping businesses with online video. The future direction for Wistia was set.

From that point on, the business really started to take off and major companies started signing up, including HBO. “The Head of Production at HBO was actually interested in being our customer,” said Savage. “We were helping them with a major problem.”

Back then, production companies would have couriers deliver DVDs of the previous day’s raw film footage to directors and other relevant parties so they could review it. It was game changing to be able to share the video content online. This led HBO to the point where they wanted to sign a major deal with Wistia, which they shockingly turned down. “It was a really difficult decision, especially at that point in time,” said Savage. “Looking back, we definitely made the right decision. We would’ve moved to LA and the company would have been a business just focused on servicing the needs of movie studios, which isn’t what we set out to do.”

Today, Wistia has over 80 employees and over 350,000 companies using their platform. Sample customers include Starbucks, Cirque du Soleil, Casper, MOZ, Trello, and Magento.

One of the impressive accomplishments about Wistia is how they have been able to build a brand that is in the upper tier of B2B companies – and it pretty much happened by accident. In the early days of the company, they had only six employees and no one with a deep background in marketing. With a little experimentation and some good luck, the team of six uncovered a strategy that opened the doors to growing Wistia’s brand presence…video. It all started with Wistia’s team page, which was designed to show prospects that they were a real company and provide a look into the people behind the business. The images would change to make it look like the team members were dancing and if you typed in the word “dance,” music would play to complete the experience. A static image is below, but here’s a link to check it out from the Internet Archive - Wayback Machine (don't forget to type the word "dance" and then "enter").

One could say the “hover over an image effect” was invented by Wistia, as it is commonly used now. The team page on their website caused quite a stir. “It went viral,” said Savage. “We couldn’t believe it and we landed a bunch of customers from it.”

The positive response signaled to Wistia that prospects weren’t just interested in the products and services they provided, but the people behind the company, and video was the best way to show that side. Inspired, they opened the Wistia kimona and started making authentic videos that showed personality such as an 80’s style video of the team working with 3D generated text. The videos continued to work, generating more traffic and customers. And with that, they realized that videos were the key to their marketing strategy.

The company has since created a full library of videos that range from tips on how to make videos to creative videos like this:

“Our company has so much creative energy,” said Savage. “It is this energy that helps fuel the business in terms of creating a product that our customers love and creating lots of useful and fun content.”

Another interesting point about Wistia’s success is the fact that the company has raised a limited amount of funding. It has raised about $1.4M from two angel rounds of funding in 2008 & 2010, but that’s it.

The team worked really hard to build a business where they didn’t need capital, which grants Wistia the flexibility to move at their own pace and build the company that they want. Their philosophy focuses on building “great stuff” and aligning with their customers’ needs.

“Mistakes are a lot more costly after you raise money,” said Savage. “We are able to take the long term view on our business and do it on our own terms.” This long term view has also allowed the company to focus heavily on its culture, which is a topic that Savage writes about. In this blog post (How to Level Up Your Company Culture), he shares some tips which are a good representation on the company’s hiring philosophies:

These are the keys to successfully evolving your culture:

“When we hire, we look for people who are intrinsically motivated. People who are good learners,” said Savage. “We encourage our employees to think about how they can invest in their own professional growth here at Wistia.”

Savage is excited about the challenges ahead for the company, as they continue to scale their business and continue to hire. If you are lucky to join the team, maybe someday you’ll have your own homemade 90’s sitcom intro video: