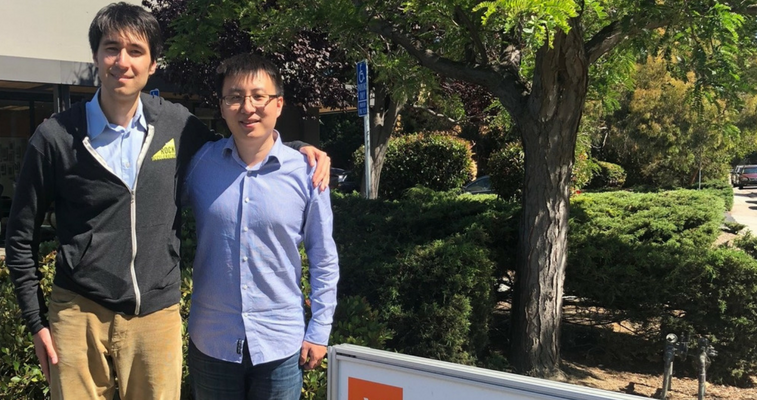 On April 18th, Harvard Business School’s Shad Auditorium was the stage for the finals of the university’s New Venture Competition. It was an eclectic group of startups pitching that night, with platforms designed for patient-doctor communication, sources for mental health crises, to manufacturing environmentally-conscious bug spray.

One company that presented was FinTech startup Alpha Vantage.

“Who here has ever accessed the Bloomberg terminal?” Co-Founder Olivier Porte asked the audience. “For those who don’t know what that is, it is a very powerful machine that will give users access to financial data, and it’s also incredibly expensive. I’m a student, I can walk over to Baker Library and use it, but what happens when I leave HBS?”

At the end of their pitch, Porte and his co-founder Steve Zheng made a bombshell announcement: they will be part of the Y Combinator for the Summer of 2018. And for those who are curious, they won $25K from the competition.

What the heck is an “Alpha Vantage”?

Alpha Vantage is creating APIs from aggregated data from all kinds of financial information sources into one centralized place, and allow users to share the data with other users without having to access a piece of hardware that can only be found in specific locations.

“From a technical standpoint, it is challenging to aggregate, clean and normalize financial market data and provide it to our customers in a unified format,” said Zheng. “I built the technical architecture and augmented the infrastructure with supervised machine learning algorithms that continuously improved the data quality based on user feedback.”

In other words, the more users of Alpha Vantage, the more intelligent the system grows. Through this, the constant feedback of data allows more information to be brought into the cloud.

Both Porte and Zheng’s backgrounds in their prior careers complement each other. Porte worked at Mitsubishi UFJ Financial Group (MUFG) New York branch as a research analyst and knew first-hand how beneficial the Bloomberg terminal is to the financial services industry at large. Zheng’s technological background involves an MIT education and working at Microsoft as part of their AI and Search Division.

However, during their first year as part of their MBA program at HBS, Zheng and Porte got to know each other not through a mutual class or study period, but through a popular video game.

“One day, in-between classes, I was playing a quick match of Hearthstone,” said Porte. “Steve, who is also an avid player of the game, was also in a match and was sitting just a few rows behind me. He noticed what I was playing and approached me after class. We quickly bonded and started sharing our strategies in the game!”

The two became friends, and as they continued to study at HBS, Zheng began to develop the software that would later serve as the backbone for Alpha Vantage. While it quietly launched on the Internet in March of 2017, positive word-of-mouth sentiments caused the software to grow in relevance. And Zheng took note of this. It started to become popular in the FinTech space after the shutdown of a particular sector of Yahoo!.

“When Yahoo! pulled the plug on its APIs, millions of self-professed ‘shipwreck survivors’ came upon Alpha Vantage as an alternative,” said Zheng. “The timing was fortuitous as Alpha Vantage launched a mere two months before Yahoo! Finance called it quits.”

One day, Zheng and Porte were out to lunch with their mutual friend, and RentHop Co-Founder and CEO Lee Lin, where Zheng asked for some feedback about his project. After hearing about it, Porte became enthralled by the idea and encouraged Zheng to keep going, but in a different direction.

Combined with Zheng technological knowledge and Porte’s background in the financial services industry, the two decided to become co-founders of this new venture.

Porte and Zheng started taking advantage of all the sources on the HBS campus, including joining the Arthur Rock Center for Entrepreneurship. At their time at the Center, Alpha Vantage partnered with angel investor and former COO of PayPal’s Boston office David Chang, who took the role as the startup’s advisor. Other folks in the Center were also taking note of what the startup was doing.

“It’s interesting because Steve is the prototypical developer for this kind of market and Olivier is the prototypical customer,” said HBS faculty member and Flybridge Capital Co-Founder, Jeff Bussgang. “Their approach is consistent with other companies that are part of the Rock Center, in the sense that they are very developer-focused. They made sure that their product is perfect for the developer and not just for the end users.”

Since late-April, Alpha Vantage has been part of Y Combinator, where they have been growing week-in and week out, as well as being able to pitch with other Silicon Valley investors. While the business growth part of the Y Combinator is beneficial, Porte appreciates a different side of the accelerator.

“Y Combinator has changed the trajectory of Alpha Vantage. The investment and the branding are certainly helpful, but YC is really about the people,” said Porte. “In addition to your batchmates - who will often be your first users/customers - and provide valuable feedback - each week the batch will come together for dinner and listen to a guest speaker (a YC alum) give a talk about their entrepreneurial journey.” Currently, Alpha Vantage’s user base is over 100,000 strong with nearly 400 million requests per day for data. The company has proven that there is a place for their software and that they have received funding from several areas, including equity-free funding from the Arthur Rock Center and $120K from Y Combinator.

As for Porte and Zheng? Perhaps they can continue their momentum with their startup and continue to grow in the same way. The team wants to remain “heads down, hard-at-work” and keep building out their developer-driven, and overall incredibly useful, product. With their time at the Y Combinator slowly coming to a close, their former mentor at the Rock Center had some good news.

“They are currently the only team out of the entire YC batch to be from Harvard Business School, and they plan on staying in Boston,” said Bussgang. “It’s interesting because neither Olivier and Steve are originally from Boston, but they see Boston as the best possible place to build out their business.”

Colin Barry is an Editor & Staff Writer to VentureFizz. Follow him on Twitter @ColinKrash
Images courtesy of Alpha Vantage